If you didn’t get a chance to review our eNewsletter, which went out earlier this week – then you’ll certainly be interested in this article. With inventories declining, the Bend, Oregon real estate market shows some interesting numbers for 2011 – especially for the neighborhood ofNorthWest Crossing. 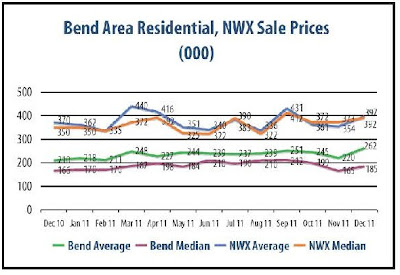 A look at the Bend Oregon residential real estate market at the beginning of January shows inventories continue to decrease as distressed properties are wrung out of the system. The number of active listings fell 4.4% from 2010 and 11.25% between Nov. 3, when we published a similar table, and Jan. 3.

“This is one case where lower numbers indicate market strength,” observed Sandy Garner, CEO of The Garner Group. “It also suggests a demand for more new construction, as it is harder for buyers to find the homes they want when there are fewer choices. New home sales increased 14% in Bend and 38% in NorthWest Crossing, where much new construction has been situated. This is a strong indicator that there would be more sales if we had more homes to sell. I also think we are poised for property values to increase,” she said.

Active listing figures are a snapshot of the date indicated as the number of MLS listings changes daily. Other comparisons below are for the 12 months of 2011 and 2010. Average sale prices dropped less than 3% in 2011 compared with 2010, while the number of sales was essentially flat. Statistics were developed from Central Oregon Multiple Listing Service data and represent homes on less than one acre.

NorthWest Crossing continues to identify itself as a separate market, demonstrating the appeal of this planned, environmentally-consciousBend, Oregon neighborhood on the west side. Comparative figures in the table below show gains across the board, some of them substantial. The gap between values in NorthWest Crossing and Bend as a whole continues to widen. The average sale price in NWX last year was 60% higher than the Bend figure, up from 54% in 2010.

The large jump in the number of homes listed and sold last year in NorthWest Crossing was due in part to a shortage of new homes available in 2010. Builders responded aggressively in 2011 and more new homes were listed, shown and sold.