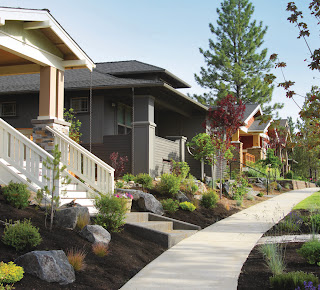 You may have recently read our article about this topic in our eNewsletter, but we think it’s worth repeating. There has been much discussion at industry conferences and in trade publications about the strength of the new urban community in a tough housing market. This is remaining true even when you take a look at Bend, Oregon real estate – the neighborhood of NorthWest Crossing is a great example of this trend.

What exactly does new urban mean anyway? Formally, New Urbanism is a specific set of planning and design principles that focus on reproducing pedestrian-friendly traditional neighborhoods containing homes, businesses, employment centers, parks and schools. Clearly, our most prominent local example of this is NorthWest Crossing, which was originally designed on these principles.

While the movement has been embraced by eco-theorists and a broad array of social reformers, at its core is a solid base of professional thought articulated by the Chicago-based Congress for the New Urbanism (CNU), founded in 1993.

“Where all the well-intentioned planning in the world couldn’t slow urban sprawl, the economic collapse stopped it dead,” Ivey wrote. A February 2011 study by the National Assn. of Realtors shows most home buyers are willing to sacrifice square footage for less driving, he noted. Nearly 60% of respondents say they would choose a smaller home if it means a commute time of 20 minutes or less.

Andres Duany, one of the founders of the New Urbanism movement and co-founder of the CNU, told Ivey that economic and environmental realities will force changes in the way people think about their living situations. The housing crisis and financial meltdown offer a chance for a “great reset” on how communities function going forward, he said.

“The housing bust is temporary, but the 21st century is permanent,” Duany said, adding that challenges of expensive energy, concern over climate change and an unsustainable national debt will demand development based around self-sufficiency, urban agriculture and local decision-making.

NorthWest Crossing is recognized in a collection of planned community examples compiled by the Ithaca, NY-based New Urban Network. It employs a slightly different paradigm than the large-scale urban redevelopment projects in major population centers that often receive attention. Here, nothing had to be torn down. Preservation of natural features was emphasized. And the goals were grounded in practical market appeal rather than social reform.

NorthWest Crossing pushed the envelope in regard to green building, insisting on compliance with Earth Advantage standards. When the first home was sold in 2007, buyers not already practicing environmental impact reduction had be sold on the advantages of green building. Today, it is a practical philosophy that merges energy and resource conservation with hard economic benefits. Broad green building principles are now mainstream; advanced concepts are nearing the point of economic neutrality.

No crystal ball in the late 1990s or early 2000s could have revealed the changes in the housing market that would follow later in the decade. It would have been much safer to transform the 486 acres of pines, rimrock and pumice into an conventional upscale suburban community. But the foresight applied to creating a different kind of neighborhood for the time and place, and the employment of landscape architects and land planners experienced in the burgeoning New Urban concept, set NorthWest Crossing up for success.

While the rate of growth has been scaled back, NorthWest Crossing continues to challenge expectations of national trend analysts. Builders are building; buyers are buying.

We’re lucky enough to have our headquarters in this progressive neighborhood, and have the on-the-ground expertise to offer our buyers and sellers in NorthWest Crossing. Because of our commitment to green real estate in Bend Oregon, it is the perfect place for us to call home.  Interested in learning more? Contact us anytime. 541 383-4360